Millions of people around the world agree that they are suffering from a debilitating and irrational fear of spiders. This fear is what we call arachnophobia. To them, thinking of spiders conjures images of 8-legged, fearsome monsters. They freeze in fear each time they see a spider and refuse to go out of the house if there is one “waiting” for them outside and ready to pounce on them.

What arachnophobes do not know, and probably should not know, for now, is that we are all living within feet of a spider. They are under tables, couches, behind cabinets, and anywhere they can be left undisturbed. This only goes to show that spiders are in fact, peaceful creatures that would rather be left alone. There is nothing to fear with spiders, they just look different and creepy but are gentle. 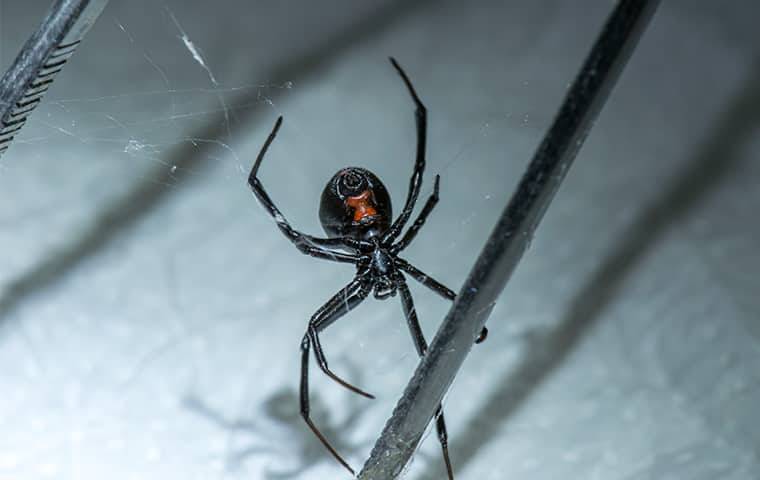 With that said, there are quite a few poisonous spiders here in Raleigh, though they are gentle and will bite only when threatened. The best thing to do is to learn how to identify these spiders and know how to act when you see one.

So, what are these venomous spiders that people see in Raleigh? Keep reading and you will find out.

First, a brief overview of spiders.

Spiders are classified as arachnids, that is why the fear of spiders is called arachnophobia. They are related to ticks, mites, and other feared creatures, scorpions. They are invertebrates.

There are 45,700 species of spiders, and you can find them all throughout the world except for Antarctica. Most of these spiders are peaceful, some are poisonous and can be dangerous to humans if provoked. A great majority of them do nothing but help the ecosystem by controlling the population of insect pests that destroy crops. Imagine a world without spiders: most crops would be devastated, which will lead to a food shortage for humans.

Some spiders have 8 eyes, some have 6. Despite all these eyes, they do not see clearly. This is why most spiders depend on “listening” to their silk web when prey is trapped in it. All spiders have venom, but some have more in their arsenal to make them dangerous to humans.

Most spiders are carnivores: they eat insects like flies and mosquitoes. One way they do this is they trap insects using their web made of the silk that they produce themselves. These silks may look so thin and fragile, but they are very strong and flexible. Spiders are not capable of chewing food, so they release enzymes that would liquefy their prey. After that, they suck out what remains of the prey.

Spiders To Watch Out For

Spiders do not mean any harm to humans; they do not attack just because. However, if they feel threatened or are backed into a corner, they will defend themselves. Here in Raleigh, there are two spiders you have to watch out for, the black widow and the brown recluse spiders. Both have powerful venom that is dangerous even to humans. Let us take a closer look.

This species is one of the two venomous spiders in the United States. Black widow spiders are 15 times more poisonous than rattlesnakes, and that says a lot about them. Fortunately, only the females bite. Their venom is very potent and can be very painful, but is not life-threatening to adult humans. However, it may cause death to children and the elderly.

The female black widow has a shiny black body with a red hourglass marking on their abdomen. Its red hourglass marking serves as a warning to its enemies that it is poisonous and that they should stay away. It can grow to about 1.5 inches long. The male black widow is just about half the size of the females, lighter in color, and has either red or pink spots on their backs.

They stand by their name because females kill their male counterparts after mating. The female would then preserve the dead male so that its offspring would have food after they emerge from their eggs. Females can live up to three years, while the males can live up to a year.

Black widows eat insects and other arachnids, insects like mosquitoes, flies, ants, termites, and roaches. Black widows use their silk webs to catch them, then approach their prey and cover them in silk. It then bites into it to release an enzyme to turn their prey into liquid.

Seek immediate medical attention if you accidentally bump into one. Wash the area of the bite with soap and water. After that, put a cold compress on it. If you still can catch the same black widow spider that bit you, do so. It does not matter if it is dead or alive. Present it to your physician so that he or she can make an informed decision on the type of care and treatment you need.

To get rid of black widows, here are some tips:

1. Seal off cracks, openings, and holes by caulking to close possible entry points for the black widow spiders. Use a gun and sealant. Seal holes around the cables, walls, and faucets.

2. Remove plants and tree branches that are scattered around your home. Clear away ivy plants if you have them. Black widows love plants. Cut or trim shrubs and grass.

3. Avoid using outdoor lighting. It attracts the bugs, the spiders’ natural prey. When bugs are around, the black widows would follow, then stay there longer.

4. Invest in weather stripping. Place it around the windows and walls.

5. Remove clutter as these are potential hiding spots for black widows. Black widows, like all spiders, like to remain undisturbed. Clutter gives them a place to hide. They can hide in boxes, woodpiles, under the closet, under the furniture, and shoes that have not been worn.

6. Check the insides of your shoes before wearing them. You would not know if black widow spiders are hiding there.

7. Use a vacuum cleaner to clean around the house. Move your furniture a bit so you can vacuum the area where it stood. Seal and throw away the vacuum bag outside your house and make sure nothing in the bag can find its way back again.

The brown recluse spider is the second most venomous spider in North America. It is also the most common of all the brown spiders. They are characterized by the violin-shaped marking on their bodies. They have 6 eyes that are arranged in three pairs.

If you are bitten by a brown recluse, go see a health care provider. Their bites are not fatal, but some people develop severe symptoms. Bites by the brown recluse often produce small red marks on the skin, but resolve by themselves.

Symptoms include fever, chills, nausea, vomiting, and sweating. As much as possible, bring with you the spider that bit you. This will allow the doctor to make an informed decision about the type of treatment to give you, Wash the wound with soap and water and then put a cold compress on the bitten area for about ten minutes. Here are some of the things you can do to get rid of the brown recluse spider:

1. Seal cracks and openings by caulking. These can be used as entry points for the brown recluse spiders. Keep in mind that these spiders are small enough to sneak into small holes.

2. Clear away plants around your house because brown recluse spiders can live in these plants. Trim shrubs, decorative grasses, and plants, especially ivy.

3. Avoid using outdoor lighting because it attracts bugs. Brown recluse spiders thrive in places where there are plenty of insects. They would soon follow where there are bugs to eat.

4. Wear gloves when gardening to protect your hands from bites in case you run into a brown recluse spider.

5. Remove clutter both inside and outside the house. Clutters attract spiders. They can hide in boxes, woodpiles, the back of the closet, under the furniture, and shoes that have not been worn for a long time.

If you already have poisonous spiders in your home and your lawn and do not know what to do about them, do not worry. The best pest control company in Raleigh is just a call away—Go-Forth Pest Control.

Go-Forth Pest Control is a name trusted by residents of Raleigh since 1959. Their highly competent yet friendly technicians will make sure that you get rid of your pests in no time. Call us now for more information.