The dark weevil of the vine is a real nuisance in the nurseries and it rides the plantations of the scene. This species was first announced in Connecticut in 1910. This key insect is the most ruinous and widely appropriated type of root weevil in the Otiorhynchus class. Adults and offspring lean towards rhododendron, Rhododendron spp., Tagus, Taxus spp., Euonymus, Euonymus spp., and Japanese holly, Ilex crenata. The young also eat the underlying hemlock foundations, Tsuga spp. Landscaping managers refer to this creepy crawly as the taxus weevil. 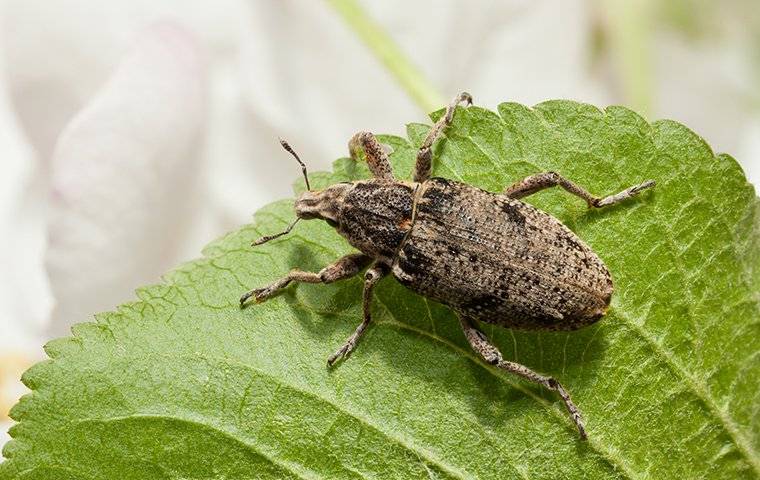 The black weevil of the vine is about 1/5" long and mostly black in color. It is slightly larger than the strawberry root weevil, but the two are difficult to distinguish.

Large amounts of these weevils in an area can severely damage and even kill the affected plants. This weevil cannot fly and disperse by the drag that often brings them wandering in homes and other buildings. In some cases, a large number of weevils can be found crawling on floors, walls, and even ceilings.

This weevil is found in many areas of the United States, including most of California. It is a pest of many plants including strawberries, blueberries, rhododendrons, azaleas, yew trees (Taxus spp.), Camellias, many types of ivy, and other plants.

These vermin hibernate as young offspring on earth. Development hatchlings are 10-15 mm long and resting form (pupal) cells in the dirt in the early spring. Adults often rise out usually from May to June and in North America just the females are known. They are dynamic nocturnal feeders and when they get worse, adults quickly fall to the ground. In the midst of sunny hours, adults take refuge in dull places on stems of plants with thick foliage or litter and mulch.

Adults require 21 to 28 days of foliage to encourage the creation of eggs. They can lay over 500 eggs over a time of 14-21 days. The eggs are deposited in the dirt near the base of the host plants. They occur in 10-14 days in small pups that feed on roots until temperatures drop in the fall and cause them to move more in the ground where they spend the winter. Sporadically, some adults can survive winter indoors. Just a single era happens every year in Pennsylvania.

Long-term relief from infestations depends on the homeowner’s willingness to replace those host plants of black vine beetles in landscaping. Short-term relief depends on treatments directed around the building by a pest management professional. Pesticides are toxic. Perused and take after titles and insurance on names. Handle with precision and store in unique marked magazines outside the range of young, domesticated, and domesticated animals. Dispose of the discharge supports immediately, securely and in a place. Try not to disturb the search, streams, or lakes.