The Mayfly belongs to the order Ephemeroptera and varies in size, but most species have a 1¾ inch long body. Its color also ranges from pale white to brown to black. Some also have bright streaks of yellow or some other color. Mayflies in South Carolina are also called shadflies or lake flies. A mayfly typically has four wings and three long hair-like appendages that extend from the abdomen. When resting, adult flies hold their two pairs of the upper membranous wings folded vertically above their abdomen. 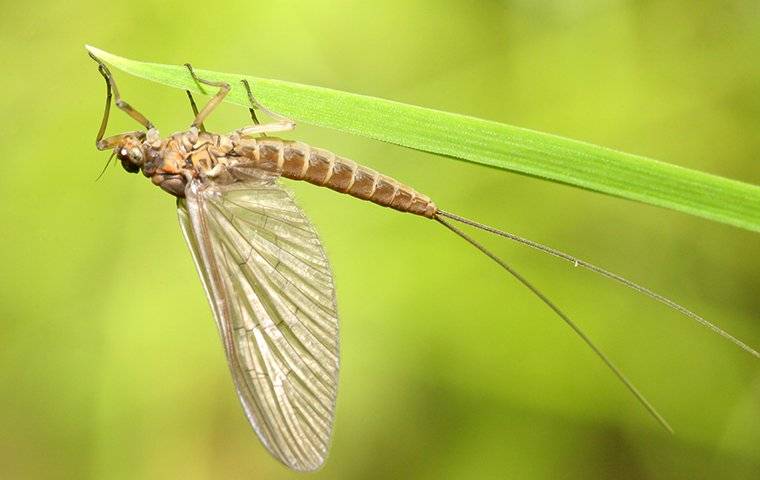 Adults live only a short period, enough time to mate and lay eggs. They do not feed. The eggs of mayflies are laid in water, and the nymphs live at the bottom of the stream, lake, and pond where they feed on small aquatic plants, animals, and organic material.

Typically, these flies produce only one generation per year and adults of a certain species emerge in large numbers at the same time. Sometimes emerging species become massive swarms where mayflies literally cover the soil in piles after mating. Adults become structural plagues when they are drawn to night lights, at times in large numbers.

These insects are known to develop in ponds, lakes, and rivers. They play an undisputed role in the aquatic ecosystem because they are an important source of food for many animals, especially fish, frogs and other insects that live in water.

As a basically water insect, mayflies spend a large portion of their lives in the water. They are found around freshwater sources such as streams, lakes or lakes. Adults leave the water to mate, and females will lay their eggs while flying low over the water or in the water straightforwardly. Mayflies are frequently thought of as an indication of sound water biological communities since they are extremely touchy to toxins.

Mayflies are primarily annoying bugs that don't bite or sting. They do get pulled in to the light, which can bring about huge swarms around structures during the evening and heaps of dead flies beneath lights and windows in the morning. In regions that see extensive swarms, mayflies could influence driving conditions and visibility. For people who are sensitive with allergies, mayflies could be a wellspring of regular hypersensitivities. When they die, their shed skin, bodies separate and are effortlessly carried away by the wind.

How To Prevent & Control

Mayflies cannot be controlled through treatments because they reproduce in aquatic environments where they survive. They only become pests when they get invited by their attraction to outdoor lights in buildings. However, any flare-up can last for  a few days. Where these bugs become a problem, exterior lights should be turned off immediately, or you can employ the use of yellow “bug lights” bulbs. Commercial buildings need to use sodium vapor lamps in luminaires instead of mercury vapor lamps.

While there is little that can be done to avoid mayflies completely, there are steps that can be taken to limit the numbers around the home. Mercury-vapor lights ought to be supplanted with high-weight sodium vapor lights with white brilliant and bright light bulbs ought to be supplanted with yellow globules. Homeowners ought to likewise make sure all screens are in place, seal openings and splits that may allow passage.