Left untreated, mole crickets can end up noticeably damaging to the garden. To keep harm from happening or getting out of hand, mole cricket disposal is regularly the main response. The mole cricket has a size of up to 1½ inches and belongs to the Gryllotalpidae family. Its color is mostly brown, tan or reddish-brown. Mole crickets are strange-looking insects that typically possess large, shovel-like front legs that bear a close resemblance to those of moles. They live on the lawn where they dig quickly and actively. 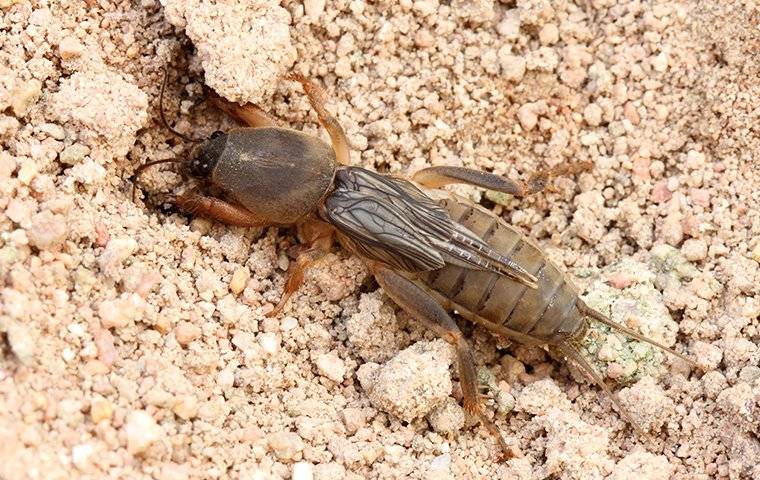 Turf damage can occur quickly when there are large populations. Adult mole crickets have the ability to fly and are attracted to outside lights, which brings them in the presence of people. This unusual looking insect often causes a lot of worries to some owners until they have been identified by a professional.

These crickets are mostly active at night and most of their lives are spent underground where their burrows can extend up to 30 inches. There are a number of common species that are originally native to South America the North Cricket or Common Cricket (Neocurtilla hecadactyla), Southern Mole Cricket (Scapteriscus vicinus), Short-Winged Eagle Cricket (S. abbreviatus), and tawny mole cricket Scapteriscus acletus).

Mole crickets are common throughout the eastern United States, but are more frequent in the Southeast, especially in Florida. Mole crickets are grass & lawn pests, especially on golf courses. The damage comes from their burrowing activities, as they feed on the root system of the lawn.

Effective mole cricket control relies on the season and ebb and flow the life phases of the pest. Overwintered mole crickets end up noticeably active in early spring. While treatment amid this time decreases burrowing harm, it may not be as powerful as later treatment. Summer treatment is more successful for the pest. Nonetheless, parasitic nematodes, which assault the adults, can be connected in spring before females lay their eggs. When harm obvious, control of these pests begins to be more troublesome.

To check for mole crickets ahead of schedule in the season, you can flush them out with foamy water—around two tablespoons of dishwashing fluid to one gallon of water. Pour the foamy water over a 1 to 2 square foot range. Do this at am early hour in the morning or late at night. On the off chance that mole crickets are there, they will surface inside minutes. In the event that no less than two to four mole crickets surface, then focus on the range for treatment in summer. Inundate well in the wake of applying the lathery water. Organic controls incorporate predator bugs, as crabronid wasp and tachinid fly, and in addition nematodes, which are best connected in early spring (Mar-Apr) or fall (Sept-Oct) for adult mole cricket elimination.

Chemical bug sprays, for example, Imidacloprid (Bayer Advanced, Merit) are typically used in June or July to slaughter the pest. They can be controlled with showers, granules, or lures. Apply when overnight temps are no less than 60 degrees F. (16 C.) and water the zone after. Damp soil assists with the entrance of the bug spray and urges mole crickets to rise to the top to feast upon lure.

How To Prevent & Control

Where mole crickets are usually found to infest the lawn, the lawn will have to be treated with a residual parasite control product labeled for turfgrass or bait for the mole cricket. It is best to consult a lawn care company as the timing of applications is critical to successful control of this pest. When crickets are attracted in large numbers to the exterior lights of a house or building, the lights should remain off when no light bulbs are needed or replaced to a type less attractive to insects (for example, yellow bug lights or sodium vapor).