The plaster beetle is 1/16-inch long, and its color varies from brown to reddish-brown to black depending on the species. Plaster beetles belong to the Lathridiidae family, which contains many different genera and species. These are tiny beetles for the most part, and come in different types of shape and color, so identification by an uneducated eye is more difficult. Plaster beetles can also be known as tiny brown scavenger beetles or lathridiid beetles. Most plaster beetles in Charlotte are good aviators and can be found attracted by window sills, sinks and light fixtures. These beetles got their name from the moment that the walls of the homes were constructed with a mesh of wire and wet plaster. 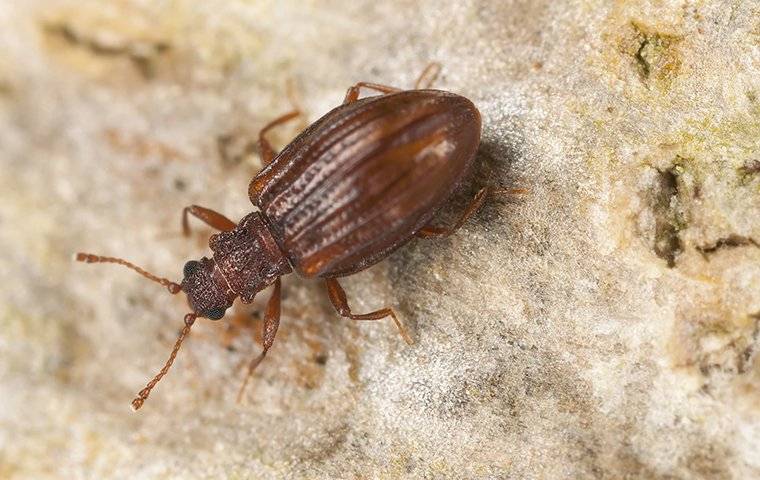 Invariably, the excess moisture behind the wallpaper installed before the walls had dried promotes the growth of mold, which served as food for these beetles. As beetle populations grew, beetles would begin to emerge from their breeding grounds, often appearing for hundreds or thousands.

The life cycle of plaster beetles is also relatively very fast, occurring in as little as 13 to 28 days, which results in a large number of beetles. Newly constructed homes and buildings use prefabricated drywall boards. Therefore problems with plaster beetles are found less often. Because plaster beetles are fungus feeders, however, they can thrive in any building where there is water leakage, poor ventilation, or other sources of moisture that allow the development of molds inside walls or other gaps.

These beetles develop wherever suitable mold can grow in which the larvae of beetles can be fed. Gypsum beetles naturally occur outside buildings and can be attracted to homes and buildings that possess bright exterior lights. Any location within a building or home where moisture may persist due to leakage of water, condensation or inadequate ventilation may be the source of a plaster beetle infestation. In addition, some species of plaster and fungus beetles can also infest moldy grain or other food products, so it can be found where grain products are stored or processed.

The key to controlling plaster beetles is to locate and correct the excess moisture that is serving as the breeding source. Sometimes, when a leak is fixed or the ventilation is improved, no action is taken to dry the area that is filled with liquid. The area then continues to support the growth of molds, thereby giving room for plaster beetles and other fungi that feed beetles to thrive. Once corrected for moisture problems, treating a pest management professional can be beneficial in reducing the number of beetles seen.

Plaster Beetle Identification: An expert ought to come and decidedly recognize the mortar scarabs with the close examination and the zones where invasions are found. An expert can prompt you on the best way to better keep the proliferation of plaster beetle insect in your home by making the condition as horrible as workable for this dampness adoring insects.

Insecticide Spray: An exterminator can apply a granular or fluid bug spray outside to keep plaster insects from attacking or infuse divider voids with a non-lingering vaporized, trailed by an emphatically charged boron-based conduit, a long haul fungicide, and bug spray. Splashes containing Lambda-cyhalothrin, deltamethrin, Bendiocarb. These insect sprays are biodegradable, about unscented, and not profoundly poisonous to warm-blooded creatures.

Evacuation of Plaster Beetles: Plaster bug cadavers can be expelled with a vacuum. The territories treated with bug spray ought not to be cleaned until 3 weeks taking after the exterminator’s visit to ensure every one of the grown-ups is ended.